The Skinny on Fats 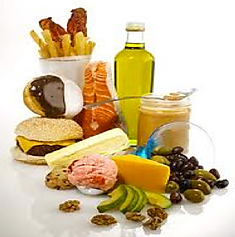 For years we have been told that fats are the “bad guys” of the diet story. Yet science tells us that there are good oils–not just less-bad-for-you oils, but oils that positively improve health in many unexpected ways. Trying to figure out “who is who” in this story has been difficult for the public; over the years, scientists change their views regularly. Polyunsaturated oils such as safflower and sunflower apparently were the “good guys” in the fat realm for some time, only to be discredited later as possibly leading to cancer. More recently, olive oil and coconut oil have been the favorites, but the oil story is not that simple.

To appreciate the specific roles that different fats or AKA fatty acids have on health, it is first useful to understand their basic chemical structure. Fatty acids are long chains of carbon atoms bonded to each other by hydrogen atoms. The fatty acid molecules are grouped as saturated or unsaturated.

A saturated fatty acid has one hydrogenated bond between each pair of carbon atoms in the chain. It is literally “saturated” with hydrogen atoms. These hydrogen bonds hold the molecule stable. Saturated fatty acids come from animal sources, such as meat, dairy, butter, and lard as well as coconut and palm oil and stay solid at room temperature.

Coconut oil has the unique potential to aid in the protection and treatment of a number of health problems due to its documented antimicrobial, antioxidant, anti-inflammatory, antiulcerogenic, antimutagenic, analgesic, and antipyretic activities.1.2. Harvard researcher Vigen K. Babayan, PhD is credited with developing the process of distilling coconut oil down into pure MCT oil, (Medium Chain Trigycerides). He called the purified oil fractionated coconut oil or MCT oil. Researchers began investigating the nutritional and medicinal uses for MCTs. A great deal of research followed and it was soon evident that MCTs possessed unique biological properties with a number of important nutritional and medical applications. Note: unlike other oils when MCTs are consumed, they digest very rapidly and begin breaking down immediately.

Monounsaturated fatty acids are a more flexible molecule such as lipids or oil, which do not stay solid at room temperature. They are found mainly in plant foods, such as olive, canola, and peanut oils. Monounsaturated fats are the best choice because they lower LDL cholesterol without lowering HDL “good” cholesterol. By the way LDLs are as necessary as HDLs. For more information on cholesterol and cardiovascular disease click here:

There are three elements that can break these delicate unsaturated oil molecules: heat, light and oxygen. The more unsaturated the molecule the less stable and vulnerable to breaking these molecular bonds. This will cause these oils to become rancid and produce toxins and free radicals that can be detrimental to good health by causing inflammatory and degenerative disease.

Polyunsaturated fatty acids are very delicate and will go rancid quickly when exposed to heat, light or oxigen. Some polyunsturated fats such as flax seed oil don’t even stay solid in the freezer. Polyunsaturated fat, found in organic sunflower, organic corn, organic soybean, and organic safflower oils, have been linked to decreasing total blood cholesterol by lowering LDL.

Omega-6 fatty acids are polyunsaturated, and they function to protect the body’s cells. Sources of omega-6 fatty acids include whole grains, vegetable oils, seeds, and nuts. Most Americans get too many omega-6 fatty acids and not enough omega-3s which are primarily found in seafood and fish oils. Some Omega-3s are also found in flax seeds and walnuts, chia seeds, some canola and soybean oils, but the best sources are fatty fish such as salmon, sardines, cod, mackerol and tuna .

Research shows that omega-3 fatty acids, consisting of DHA and EPA help lower the risk of heart attacks, increase brain function and vision and reduce inflammation. DHA is important for the eyes, as well as, learning and behavior in both children and mature adults, while EPA is important for normalizing and regulating cholesterol and triglyceride levels. Both together are essential. In 2008, the American Journal of Clinical Nutrition published three studies showing that low concentrations of EPA and DHA resulted in an increased risk of death, as well as accelerated cognitive decline.

My favorite fish oils are ProOmega by Nordic Naturals, or if you don’t like taking gel caps my favorite liquid is the Omega Swirl by Barlene’s, which gives you 1500mg. per tablespoon, of high quality fish oil that tastes like desert. It’s also emulsified, which makes it 90% more bio-available than standard fish oils. The favorite flavor is Key Lime Pie, but they’re all yummie!

A word of caution: Omega-3-rich oils are highly polyunsaturated. This means that unless they are very, very fresh, they–like other polyunsaturates–may deteriorate in such a way as to cause harmful effects in our bodies. The bottom line: refrigerate and consume within a few weeks any flax seed oil or seeds. Buy walnuts still in the shell, and preferably vacuum-packed for freshness.

It is partly because of the freshness issue that monounsaturated oils, such as olive, have become so popular. Their chemical structure is such that they remain stable–that is, they do not oxidize–as readily as do polyunsaturates. As with other mono-unsaturates, intake of olive oil reduces levels of the harmful form of cholesterol in the blood compared to more saturated fats found in red meat, for example. It’s important to note that saturated fats have gotten bad press in the last 40 years due to the propaganda of the processed food industry. Fats such as coconut, and grass-fed butter for example, are high in saturated fat yet have been proven to be highly beneficial to health.

When cooking with fats and oils it is important to do so in a manner that does not destroy them. Never consume any deep fried foods; they are all universally soaked with toxic isomers. Remember that if the oil starts to smoke it is too hot and it is being destroyed. Here is a list of cooking oils and a brief comment on them.

Olive Oil: Contains many mono-unsaturated fatty acids. It is good for pan frying but not good for deep frying. It will break-down and become rancid. Be sure to mix some water with it to prevent the oil from getting too hot.

Coconut Fat: Good for frying only if it is not hydrogenated. Frying with hydrogenated fats are extremely dangerous to your health. In addition to the trans-fatty acids of hydrogenated oils, they contain traces of metallic nickel which is used in the process of hydrogenation.

Organic Grass-fed Clarified Butter: Very good for frying. Commercial users will find it to be more expensive that other oils.

Peanut Oil: Recommended for home or commercial use. You can use the same oil every day but it should not be used more than a few hours each day. It is suggested that you use only organic peanut oil as oil processed from moldy peanuts can be contaminated with aflotoxins, a known carcinogenic byproduct of the mold fungi.

Sunflower Oil: You can fry with this oil all day, but you cannot safely cool and re-use the oil. It needs to be disposed of at the end of the day.

Macadamia Nut Oil: A great new healthy alternative cooking oil is called MacNut™ oil. One of the great features of this oil is that it is low in saturated fats plus it has the ideal 1:1 ratio of omega 3 to omega 6 fatty acids. In addition, it has a smoke point of 410ºF which makes it well suited for stir frying foods.

Canola Oil: Made from genetically engineered rapeseed and used extensively in restaurants. Registered with the EPA as an insecticide. There is much controversy surrounding this oil. From the research I’ve read related to this oil, I would suggest avoiding it

Refined Vegetable Oil: Totally devoid of nutrients and breaks down easily. Should be totally avoided. Even as a salad oil.

Remember that the majority of corn and soy sold in this County is GMO, so I would recommend avoiding them all together unless it is organic. For more info on GMO click here:

As long as polyunsaturated fats are left in their natural state, known as the cis form fatty acid, they are healthful, but when vegetable oils are removed from vegetables, they turn rancid rather quickly. So manufacturers use a chemical process that converts healthful polyunsaturated oils into cancer and heart attack-causing partially hydrogenated fats, also known as trans fatty acids.

For the most part fats that have undergone chemical alterations are referred to as “hydrogenated,” “partially hydrogenated” and even “polyunsaturated.” This process simply bubbles hydrogen gas through warm oils which were chemically and physically extracted from vegetable sources such as soybeans. The hydrogen bonds to the fat molecules so that oxygen can no longer interact with it. During hydrogenation, the oil changes from a clear liquid to a solid at room temperature.

When fats are hydrogenated something drastic happens to their vital and life-sustaining characteristics. Hydrogenation destroys the nutritive value of the fat and creates a slow-developing toxicity demonstrated to be involved in (if not totally responsible for) diverse diseases including heart diseases and cancer, the two leading causes of death.

These “pseudo fats” are also referred to as “polyunsaturated.” If that word sounds familiar it is. It’s the same word repeated millions of times in TV commercials designed to dupe you into believing that hydrogenated fats are really healthy. Nothing could be farther from the truth.

Fat has many duties in our bodies. In order to maximize good health, we need avoid all refined and hydrogenated fats and eat healthy mono and polyunsaturated fats, along with good saturated fats such as coconut, and grass fed butter.