WHAT’S UP WITH GLUTEN? 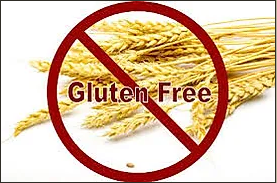 Besides being a certified clinical nutritionist, I teach nutrition at Le Cordon Bleu Culinary College. I always ask my students; how many believe that a “gluten-free” diet is just a fad? I’m not surprised to hear that eight out of ten believe it is.

You may ask what’s up with gluten and why has it become a problem now and not when we were kids? When you eat a bagel for example, it has a lot of gluten in it to make it chewy and give it texture. Gluten breaks down into a sub-protein known as Gliadin. Gliadin is resistant to all human digestion, not just for those with celiac disease or gluten sensitivity.

When protein is undigested it becomes a foreign invader in the body. For people without gluten sensitivity or celiac disease a healthy gut will deal with these invader-threats and heal quickly. But eating gluten a lot causes receptors in our gut lining to become over-active, causing an up-regulation of a substance known as zonulin– zonulin regulates the permeability of the intestinal wall. Long term intake of gluten may lead to a condition known as “Leaky Gut”.

When the tight junctions of our gut lining are open for too long it may allow other invaders such as bacteria or fungus, heavy metals like mercury and lead or chemicals from pesticides, solvents, and toxins to get into the blood stream. All of these foreign invaders cause a tremendous immune and inflammatory response.

There is a lot of research that shows the correlation between “leaky gut” and autoimmune disease. It works like this: now that the gliadin protein has triggered zonulin to open the tight junctions in the gut and these foreign invaders pass the mucosal barrier and get into the blood stream, the immune system has to get involved. A tissue enzyme knowns as TTG allows the gliadin and other invaders to be bound to human immune cells. Although the TTG is part of you, because it is now attached to the gliadin antigen the immune system does not distinguish the difference and recognizes you both as an enemy–guilty by association.

Your immune cells are going to attack everything that looks like gliadin but they are also going to attack the cells that produce TTG. They are going to keep attacking these cells as long as you expose yourself to gluten or the other offending invaders mentioned above. The problem is, TTG is everywhere in the body. TTG is in your thyroid, liver, joints, muscle, brain, blood, organs and glands. And inflammation is the body’s first response.

You may ask, why now? We rarely saw these conditions twenty or thirty years ago. The wheat and grains grown today are not the same as the grains of yester year. For more information on this, there are a few great books that I recommend: Wheat Belly, Loose the Wheat, Lose the Weight, by William Davis and Grain Brain, by Dr. David Perlmutter. A product called Glutenza by NuMedica is my go to product when I have been exposed to gluten. It’s an enzyme formula exclusively designed to remove any gliadin that may be in the gut wall. Then I recommend that people heal their gut with either Gluten Sensitivity GI Restore (cherry Chewables), or Gluten Support GI Restore capsules by NuMedica. I’m also happy to report that Martins Pharmacies are getting all kinds of yummy gluten free products that will be available so we don’t have to compromise our tasty pleasures just to be healthy.